Generate PDF for this paper

This is the introduction of the Civil Society Review issue 5 "Challenging Power: Gender and Social Justice in the Middle East". Written by Gabriella Nassif, this introduction provides an overview of the issue, the circumstances during which it was written and compiled, the thematics it covers, and its reflections on the current moment of crisis in the region through the lens of gender.

[ONLINE]: https://civilsociety-centre.org/paper/csr-issue-5-challenging-power-gender-and-social-justice-middle-east-introduction
Cited by: 0
Embed this content:
Copy and paste this code to your website.
Full text:
Full text 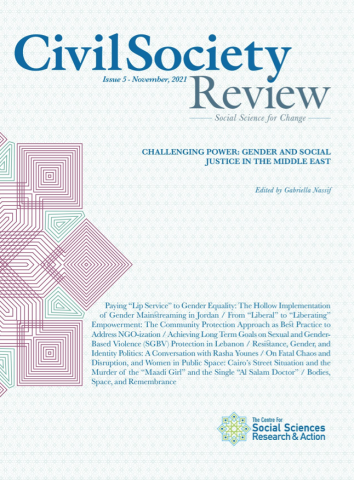 The present issue is the culmination of more than two years of work. During this time, our editorial team and our writers living in Lebanon faced countless disruptions to our normal working environments, beginning with the October 2019 Thawra; the COVID-19 pandemic and the government-enforced lockdowns beginning in early 2020; and the crippling economic and political crisis that has left Lebanon a shell of its former self. Add to this the devastating loss of human life and destruction in the aftermath of the 4 August 2020 explosion in the port of Beirut, which nearly brought the entire country to a standstill. Similarly, the Southwest Asia and North Africa (SWANA) region experienced economic downturns in the wake of the COVID-19 pandemic, while countries like Palestine, Yemen, and Syria all continued to deal with geopolitical instability, and in the case of Palestine, occupation, as well.

A few months before the Thawra, this issue began as a set of reflections and questions about current feminist work in the SWANA region, and what this looked like in the face of increasing international invovlement in civil society activities and organizations. Our reflections coalesced around three thematic focuses. The first thematic area, “Negotiating with the State,” asked authors to reflect on what Deniz Kandiyoti (1998) called “patriarchal bargains,” or the strategies used by women’s rights organizations and feminist activists “within a set of concrete constraints” (274).[1]  How are such “patriarchal bargains” made today? Has such bargaining resulted in any substantive changes to the status of gender equality? Our second thematic area, “The NGO-ization of Women’s Movements,” focuses on the historical legacy of NGO-ization, and the ways in which NGO-ization continues to impact women’s rights and gender equality organizations and movements in the region.[2] We asked authors to reflect on the ways in which the increasing influence of international donors and agencies in the field of development has both helped and hindered gender equality in the SWANA region. What does the impact of the growing presence of international funding mean for feminists across the region? Finally, our third thematic area focused on the relationship between gender, sex, and sexuality in relation to the growing influence of internaitonal donors and the NGO-ization of women’s rights and gender equality across the SWANA region. Most importantly, we asked authors to consider what, if any, radical alternatives are available to feminists in an environment that continues to uphold the heteronormative sex/gender binary? Relatedly, what is happening to those activists and organizations that actively challenge this binary?

Despite the difficulties we faced while compiling this issue, we were able to bring together a handful of authors whose work insightfully highlights many of the current trends within feminist mobilizing in the SWANA region. The articles, interviews, and personal reflections included in this issue collectively read as an assessment of the current moment of crisis in the region through the lens of gender, contributing new ways of thinking about, and reacting to the current compounded crisis plaguing the SWANA region. A further strength of this issue is the diversity with which authors use the terms “gender” and “feminist,” drawing attention to the ways that such terms are not “neutral;” rather, they are historically specific and signal established power dynamics, especially in the field of international development and humanitarian aid. Further, a handful of the pieces in this issue challenge gender as a standalone “identity,” and articulate a truly intersectional approach to the ways that gender must be used as a lens through which we can begin to understand and explain the power dynamics structuring our everyday lives.

Relatedly, the difficulties we faced while compiling this issue are illustrative for those engaged in feminist struggles and analysis. Under the current conditions (and arguably, those that preceded this current “moment” of crisis), it has become a daily struggle to ensure that our needs as workers are met. Simultaneously, the continuously increasing demands for worker productivity have made it much more difficult, and in some cases nearly impossible, for many communities to sustain their life-making processes. This is particularly true for communities that are marginalized along the lines of race, gender and sexuality, and disability, to name only a few. Framed as such, questions about the time, labor, and creativity needed to produce feminist knowledge come to the fore. Is feminist writing really possible in the current moment? If so, who is it possible for? In other words, under what conditions can such a process of creative and analytical writing take place? And how can we create space for the most marginalized writers, whose communities are under some of the most extreme pressures just to survive?

As a final note, it is important to highlight that feminist writing is an act of labor. It is grounded in material realities, it draws from our communities and personal networks, and it is embedded within the everyday political economy of survival. It is an embodied practice, one that puts front and center the challenges of existing under the current mode of capitalist production. Feminist writing is an intimate, collective activity that aims to reflect on the ways that survival is not only coded by gender, but by other axes of difference including race, class, ability, and sexuality among others. In practice, analyzing and writing about the very structures that perpetuate the ongoing violence against marginalized communities can be self-defeating. For many, the act of feminist writing and reflection means embarking on some of the most draining and intense work, only to find rejection and, in the worst cases, patronizing dismissals of feminist work as somehow “less than” work produced from a more “objective” lens, terms used to set exclusionary boundaries around knowledge production. This issue serves as a reminder of the intense nature of feminist knowledge production, and the importance of such work during times of crisis.

This issue begins with a look at the region’s long and complicated relationship with the industry of international development, with a particular focus at internationally-funded “gender empowerment” and “women’s rights” programming. The three research papers in this section foreground the ways that “single-issue” women’s rights programming, top-down and short-term international donor funding, and the effects of government surveillance on women’s rights organizations have resulted in the depoliticization of women’s and gender rights. To various degrees, each of the articles extends the conceptual framework of “NGO-ization,” or the continued professionalization of grassroots movements into bureaucratic organizations, to challenge the ways that international donor involvement in women’s rights work on the ground continues to flatten the layered and complex demands of women and girls, refugees, non-citizens, and non-normative genders and sexualities, queer communities, and LGBTQ identities in a way that reinforces the very same power dynamics that women’s rights programming, at its core, intends to change.

The interview included in this issue highlights the complexities of gender through careful attention to collective resistance and uprising. In “Working Class Power and Labor Movements in Lebanon". It discusses the video documentary “If Not Now, When?” with the director Rasha Younes. The documentary draws attention to the ways that queer and broader LGBTQ communities participated in the October 2019 Thawra. In doing so, Younes moves beyond the lens of identity politics to show that “these identities, LGBTQ identities, are not separated from all [of] these other systems of oppression that exist.” Rather, Younes’ documentary challenges the ways that current international human rights discourse un/intentionally perpetuates non-normative identities, including but not limited to LGBTQ identities, as somehow detached from the political economy of the everyday. By paying attention to these everyday realities, Younes argues, we can begin to ensure the “actualization of social justice” on the ground, without losing sight of the underlying structural logics or political economy that helps to maintain the current system.

This issue concludes with two powerful personal reflections. Both Turkmani and Elmeligy’s pieces are concerned with the issue of public space in light of various gendered contestations to the historical construction of these spaces as, predominantly, cis-gendered male. Extending Ghassan Moussawi’s (2020) analytical concept الوضع /al-wad’ (the situation), Elmeligy articulates وضع الشارع /wad’ el share’ to mean “the situation in the street/the street situation” as a framework through which to understand the often violent, chaotic, and unwelcoming environment of the street for Cairene women. In two recent moments of violence that resulted in the deaths of two Cairene women—the “Maadi Girl” and the “Al Salam Doctor”—Elmeligy highlights the ways that wad’ el share’ overcomes spatial barriers through its very flexibility: wad’ el share’ is not dependent on a particular environment; rather, it “goes into effect when a woman “talks back” to it.” As “talking back” spills across various ideological and material boundaries, so too does wad’ el share’ extend its violent logic.

Nur Turkmani’s piece reflects on the ways that Lebanese streets became a place of intimate encounters during the October 2019 Thawra. Turkmani traces the various threats to the body, from the threats of police violence during the Thawra to the immunological threats of COVID-19 as people continued to reclaim public spaces during the early months of 2020, and how women’s bodies were often at the center of these spaces. The sudden, and at times overbearing focus on the physicality of the body, across both the revolution and COVID-19, reinforced a corporeal sense of community, one that gets lost in the “bubble” of everyday living in Lebanon. The changes that the revolution and COVID-19 provoked in relation to the body were only exacerbated in the aftermath of the explosion at the port of Beirut on 4 August 2020. Once again, bodies flooded the streets, in protest of the extreme loss of life and damage. Even while under direct threat, bodies have the potentiality to create and negotiate new spaces. “The presence of our bodies has marked [public spaces] like a memory that refuses to die.”

About the author(s):
Gabriella Nassif:

Gabriella Nassif is an ABD PhD student at the University at Buffalo, and the managing editor of Al-Raida, a bi-annual, feminist journal focused on the Arab region and published by The Arab Institute for Women (AiW) at the Lebanese American University. Gabriella’s research has been supported by the UB Humanities Institute and the American Association of University Women. Her research analyzes social reproduction processes and institutions in the lives of
marginalized communities and care workers. Gabriella teaches courses on gender in the Southwest Asia and North Africa region, feminist political economy, and gender and globalization. Gabriella has also worked as a research consultant with IPSOS, UN Women, UNFPA, and the ILO on issues related to gender equality in Lebanon. Gabriella’s work has been published in Antipode, and other media outlets including The Conversation, Your Middle East, and
Muftah.