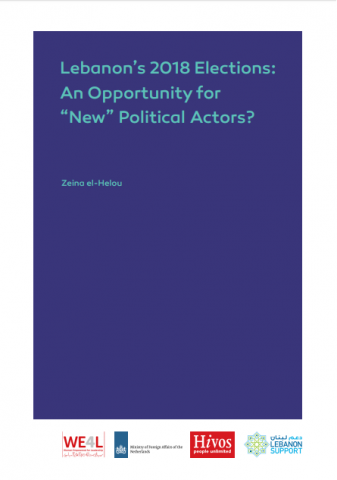 For the first time in nine years the Lebanese political scene is mobilising for elections. Although little has changed in the overall makeup of Parliament, the 2018 parliamentary elections exhibit significant differences, with a record 976 registered candidates, 113 of whom are female. A number of both male and female registered candidates, came from outside traditional establishment parties and zu‘ama which have historically dominated Lebanese politics. This briefing paper looks at the emergence of “new” political groups by tracing the trajectories of their politicisation and political engagement, and contemplating their accumulated experiences, notably in civil society circles. Exploring their discourses and programmes, the main recurring thematics revolve around the secularisation of the state, the rule of law, human rights, and equal provision of basic services. It is also noteworthy that they share similar views on economic reforms, and the reinforcement social safety nets. Despite these similar positions, creating electoral lists has proven to be challenging, leading to the withdrawal of many candidates.

This briefing paper is available in English and Arabic, and is published in the frame of the call: "New on The Scene, Can Emerging Political Actors and Women Make Headway in Lebanon's 2018 Parliamentary Elections?".