Mapping of Vulnerabilities in Lebanon 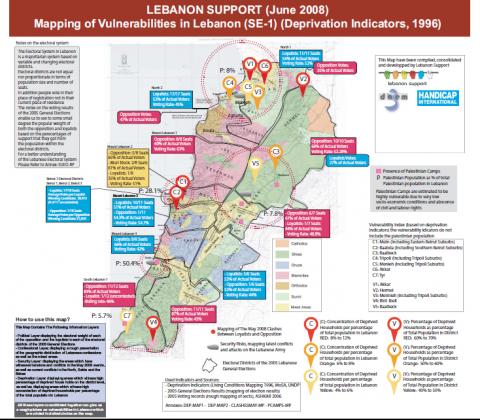 This Map Contains The Following Information Layers: - Political Layer displaying the electoral weight of each of the opposition and the loyalists in each of the electoral districts of the 2005 General Elections - Confessional Layer, displaying a rough presentation of the geographic distribution of Lebanese confessions as well as the mixed areas. - Security Layer: displaying the areas which have witnessed tensions and conflflicts in the May 2008 events, as well as current conflflicts in the North, Saida and the Bekaa - Deprivation Layer: displaying areas which witness high perecentage of deprived house holds on the district level, as well as displaying areas which witness high concentration of deprived households per percentage of the total population in Lebanon