Conflict Analysis Digest, May 2015: Spatial Fragmentation and rise in poverty. The conflict context in Saida 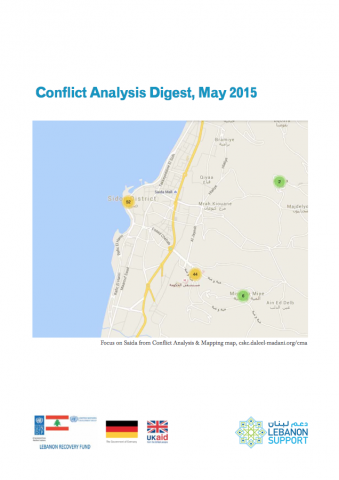 This Conflict Analysis Digest is composed of:

2- Mapped air space violations and other incidents classified as Border conflict (at the Israeli border) between July 2014 and March 2015, with a focus on the surge in tensions on the Israeli border during the last week of January 2015

Spatial Fragmentation and rise in poverty: the conflict context in Saida

Abstract:
This short report provides a contextual and analytical summary of the conflict in the region of Saida, south of Lebanon, with a focus on spatial struggles and poverty growth. It describes the main conflict actors and how they have historically contributed to the shaping of conflictual dynamics in Saida from the fifties until today. Findings highlight that while most observers and media attention are focusing on the “radical Islamist danger,” stakeholders and social actors in the city perceive the most pressing threats to be notably related to social factors, including the density of the population, spatial frag- mentation, and rise in poverty.

[This resource is available in English and Arabic]
Resource File: