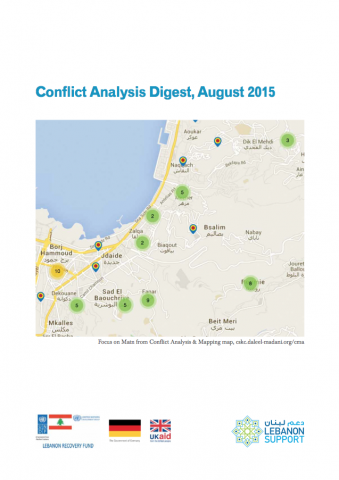 This Conflict Analysis Digest is composed of:

1- Overview of mapped conflict incidents in Lebanon, with the villages where most incidents are mapped for each classification. (Between 1 July 2014 and 28 June 2015)

3- Overview of mapped conflict incidents in the Matn.

Politics of security, discourses of fear and economic fatigue: the conflict dynamics in al-Matn

Abstract:
This short report provides an analytical summary of the conflict context, actors, and dynamics in the Matn area of Mount Lebanon. This report sheds light on the main actors, topics of contestation and conflict and its historical becoming as well as current expressions. A special focus lies on the relationship between the Lebanese host community and Syrian refugees and its development within the last four years (since 2011).

[This resource is available in English and Arabic]