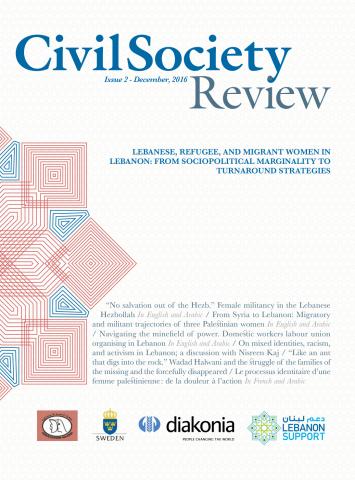 While women’s issues and rights have been at the forefront of public and civil society debate, academic, and activist publications, women’s inequalities and the discrimination women face in Lebanon have been notably undermined, whether as citizens, refugees, or migrants. However, if the publicising of the “issue of women in Lebanon” has prompted the production of more “gender-related” information and knowledge, it has oftentimes adopted the rhetoric of denunciation and victimisation. Hence, there is a scarcity of in-depth and sectoral studies on the logics of exclusion and discrimination in comparison to the number of studies adopting holistic approaches to the conditions and status of women in Lebanon.

This issue of the Civil Society Review aims to bridge this gap by addressing the lack of empirical data and gender-based analyses on the experiences of women in Lebanon, including refugees, workers, and migrants.

This issue is articulated around two main sections: a first one offering in-depth papers that delve into individual or collective trajectories of women engaged in different spheres, from anthropological, sociological, or political science perspectives. The second section, through conversations with several women, explores different stories of lived engagement and attempts at reclaiming agency over their experiences. Overall, this issue aims at shedding light on various spheres of engagement of women in Lebanon.