Between Local Patronage Relationships and Securitization: The Conflict Context in the Bekaa Region 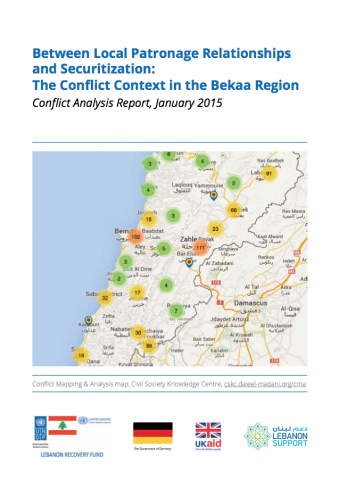 This report provides an analytical summary of the conflict context in the Bekaa region of Lebanon, with a focus on the relationships between the Syrian de facto refugees and the Lebanese host communities in the Baalbeck-Hermel area. It is based on a socio-political qualitative assessment and a conflict analysis that are primarily based on experiences and perspectives of key informants,as well as Lebanese and Syrian residents of the Bekaa. Unless otherwise noted, information in this report is based on these interviews. The report is intended as a quick reading of the field at a set point in time, and does not provide a political or military analysis nor predicts future scenarios, and should not be assumed to reflect what is happening at the national level.

The fieldwork was implemented between September 10th and October 11th 2014. As a qualitative research, it included over 20 one-to-one interviews with Syrian de facto refugees, members of the Lebanese host communities, religious and intellectual figures, NGO representatives, and members of the local authorities. The report is divided into two sections. The first section provides an analytical summary of the conflict context in the Bekaa generally, using a variety of analysis tools that cover three broad dimensions of conflict as suggested by Gattiker,namely, actors, issues, and dynamics. In addition, the first section provides a modified political, economic, social and technological (PEST) analysis of the context in the Bekaa, as well as recommendations for a conflict prevention and peace building strategy. The second section provides a case study that exemplifies how these conflict issues and dynamics are experienced by individual Syrian de facto refugees and members of the Lebanese host communities. The case study also aims to demonstrate the connections between different issues and their impact on various social groups.