Round table: New on the Scene: Can Emerging Political Actors and Women make Headway in Lebanon's 2018 Parliamentary Elections? 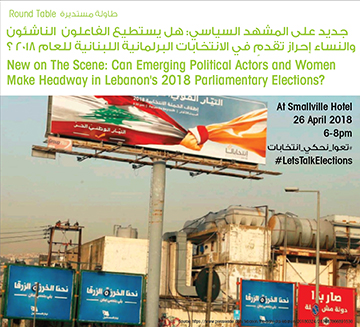 On the 26th of April 2018, Lebanon Support hosted a round table on emerging political actors and women’s participation in Lebanon’s 2018 parliamentary elections. The session aimed at discussing the findings of two briefing papers published in the frame of the call “New on the Scene: Can Emerging Political Actors and Women make Headway in Lebanon's 2018 Parliamentary Elections?”. This event is part of the “Examining Prospects for Women and New Political Actors in the 2018 Elections” project by Lebanon Support in partnership with HIVOS – Beirut Office, and is part of the Women Empowered for Leadership programme (WE4L).

The discussion, which took place at Smallville Hotel in Badaro, was led by Catherine Batruni, independent researcher, who presented the first briefing paper "Politics, Progress, and Parliament in 2018: Can Lebanese Women Make Headway?" written with Marcus Hallinan, and Zeina el-Helou, an independent researcher and a political activist who discussed the second briefing paper titled"Lebanon's 2018 Elections: An Opportunity for "New" Political Actors". It was moderated by Halim Shebaya, a writer and university instructor at the Lebanese American University. 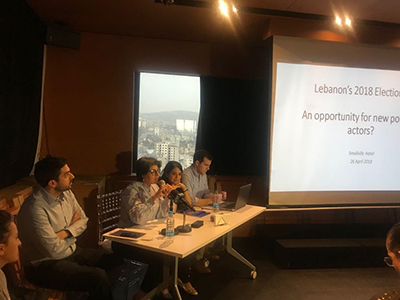 Shebaya started the discussion by recounting some of the perceptions the Lebanese public have about the elections such as their distrust in the political process, how some call for boycotting elections, and how others see this election as an opportunity for a “new” political scene.

Batruni presented the main research questions that drove her research: whether this election will provide greater female representation in Parliament, whether elected women will come from traditional political parties and families, or some new independent faces will emerge, and how the so-called “civil society” coalitions will deal with the dominant confessional and gender dynamics.

She provided a summary of the electoral process and the way candidates are chosen through preferential votes, pointing out how the new electoral law denied 41% of men and 24% of women from running due to its eligibility conditions for candidacy; having to join electoral lists. According to Batruni, if a gender quota were to be adopted, more women would be encouraged to run on women-only lists or more generally. However, political parties welcome confessional quotas and dismiss gender quotas. She also noted that traditional political parties in Lebanon are uninterested in nominating women for Parliamentary elections despite having women in some of their top decision-making roles in their internal structures. This, for her, is a clear dissonance between the rhetoric these parties use and their practices.

Batruni concluded her remarks by recommending the need for electoral, economic, labour, and legal reforms towards full equality and citizenship for women, so as to advance their effective political participation.

Moving to the emergence of “new” political actors, Zeina el-Helou presented her questions and methodology to the audience, and explained how she explored these actors’ trajectories in addition to defining “new” in the Lebanese context. She found the main characteristics of “new” actors to include: not belonging to political families, not claiming regional or sectarian affiliation, and adopting a rights-based approach instead of depending on clientelistic networks used by traditional political parties.

Furthermore, the vast majority of candidates el-Helou interviewed had previously joined political parties, but subsequently left due to the way these political parties were managed, their flawed decision-making mechanisms, and the values they adopted. Hence, they organised themselves through “civil society” organisations and movements where they advocated causes such as human rights, good governance, electoral reforms, and women's rights for the past 13 years up to the present.

El-Helou found that those actors experienced political milestones that transpired in Lebanon and shaped their activism from 2005 until 2018. These milestones include, but not limited to, the Cedar Revolution in 2005, the emergency response during the 2006 Israeli war on Lebanon, the 2011 campaign for the downfall of the sectarian regime, the 2015 response to the garbage crisis, and the rise of movements such as Beirut Madinati in 2016. She also went over their priorities and positions towards contentious issues such as refugee rights in Lebanon, and the disarmament of Hezbollah.

El-Helou wrapped up her intervention stressing that the rights-based positions of the “new” actors are consistent with their background and political socialisation. However, they need better engagement in Lebanese political life, more collaboration among their coalitions, and to have rhetoric and an agenda that are reflective of the priorities of the Lebanese public. 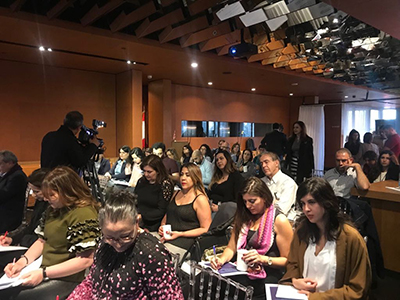 The discussion was attended by over 40 people among whom were female candidates that withdrew from the current elections, candidates who are still running, journalists, researchers and academics who directed questions to the speakers about their definitions of “civil society”, their methodology, analysis of the findings, and recommendations. Generally, many comments and questions were raised regarding the sectarian nature of Lebanese politics, how traditional political parties will continue to dominate Lebanese politics in the absence of an organised front from “civil society” coalitions, the lack of democratic mechanisms inside political parties, and the systematic alienation of women.