Reconciling with the Past, Countering Amnesia

On September 18, 2018, Lebanon Support and Forum Civil Peace Service/ forumZFD Lebanon hosted an event at Antwork (Hamra) to present the ‘Mapping of Initiatives addressing the past in Lebanon’. In addition to presenting the map and its key findings, a  panel discussion was held with various actors from civil society, education, and policy making who shared their insights and experiences on initiatives addressing the past.

The event started with an overview by Jenny Monroe (forumZFD) on the reconciliation process in Lebanon and on the importance of the mapping for actors in the field, so as to fill gaps and explore synergies about initiatives addressing the past in Lebanon.

Mia Bou Khaled (Lebanon Support), introduced the context of reconciliation in Lebanon, characterised by a state-imposed amnesia, as many of the human rights violations that occurred during the Lebanese Civil War (1975- 1990) and post-war period remain unresolved till today. She explained that the mapping documents initiatives between 1990 and 2017 that aimed at addressing past conflicts and their aftermath in Lebanon. After briefly presenting the methodology, as well as the coding framework to collect and to code the data, Mia demonstrated how to use the mapping online, and the available filters and search tools. She also presented some of the key findings from the report on the map: "Contested history, conflicting narratives, and a multitude of initiatives: An analysis of the Mapping of Initiatives addressing Past Conflicts in Lebanon" based on the database. For instance, the data indicated that the majority of initiatives focused on seeking the truth and right to know, whereas initiatives seeking reparation or justice and non-recurrence remained relatively low.  This could be read within the context of the abovementioned amnesia, as many of the human rights violations that happened during the Civil War and post-war period have not been officially addressed to this day. An infographic visualising these trends, and a brochure about the project featuring the infographic on a smaller scale, were distributed to attendees at the beginning of the session.

After the presentation of the mapping, Léa Yammine (Lebanon Support) opened the panel with discussants from civil society, education, and policy making. 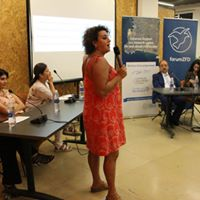 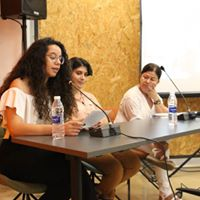 Lamia Abi Azar (Zoukak Theatre Company) started with a theatrical performance, during which she read the same text from beginning to end, then from end to beginning. The text illustrated the different narratives that could be told about the war and past conflicts in Lebanon.

Yara Ayoub and Hala Abi Saleh (Fighters for Peace) shared both their personal perception of Lebanon’s civil war, as part of a younger generation that has not lived it. They emphasised the difficulty to understand their parents’ past, due to the lack of an official narrative or comprehensive information about the War. Unanswered questions regarding this period incited them to read more about it and to join the Fighters for Peace organisation. Yara pointed out that including the history of the Civil War in schools’ curriculum is a first, important step in order to deal with the past. Then, Hala discussed how wars are multilayered and encompass diverse perspectives.

Wadad Halwani, shared some insights based on her experience as the Head of the Committee of the Families of Kidnapped and Disappeared. She presented the committee’s various initiatives that aimed to deal with Lebanon’s past, and listed their major campaigns between 2000 until April 2018. 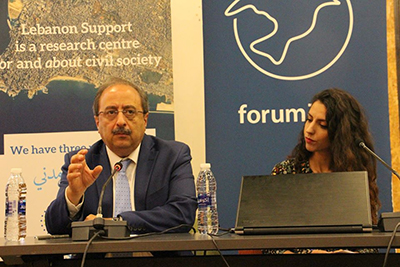 Ghassan Moukheiber, former member of Lebanese Parliament and human rights activist, also shared his personal experience in working on initiatives tackling reconciliation in Lebanon, which have been particularly interested on war memorials and commemoration. In 1999, he suggested to create a park in Beirut and plant a grove for each person missing or forcibly disappeared during the War, symbolising a graveyard where families could visit and remember their loved ones. In 2002, he became a member of the Lebanese Parliament. During his term and proposed to establish a commemoration day of the civil war on the 13th of April, which never got through. Nevertheless, Moukheiber explained that he is still active in civil society organisations dealing with peacebuilding and reconciliation. 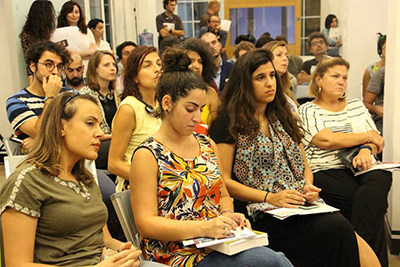 Attendees were able to ask the discussants questions about their testimonies and their engagement in the reconciliation process in Lebanon, before continuing the discussion and networking during the reception.