On the 20th of July, Lebanon Support organised a reading of the new electoral law with Dr. Ali Mourad, Assistant Professor in Public Law at the Beirut Arab University (BAU), affiliated to the European Recherche Center of Rennes (CEDRE), Rennes-France, and member of the Administrative Board of the Lebanese Association for Democratic Elections (LADE).

Dr. Mourad started the presentation by explaining the general components of the new electoral law such as its proportional basis, the territorial division of the country in cazas, as well as the Parliament's seats distribution.

The new electoral law, under which the 128 members of Parliament will be elected, institutes a proportional representation across 15 electoral constituencies. In order to provide the audience with a clearer frame of reference, Dr. Mourad went through a detailed comparison between the new proportional system and the previous majority law which was adopted for the last elections in 2009. For instance, if the confessional quota of Parliament’s seats is still maintained, the new electoral law, unlike the last one, does not allow candidates to run for elections without joining an electoral list. This means that individual candidates cannot run for elections independently of electoral lists anymore, in an attempt to reduce casting votes based on clientelistic relations. Consequently, voters will have to choose only one of the competing lists in their affiliated constituencies, without the possibility of crossing any name out of it. However, voters will have the option to give two preferential votes among candidates on the same list they have chosen.

The voting process will also be carried out using official pre-printed ballots that will only be distributed at voting stations. The pre-printed ballot aims to protect voting confidentiality by preventing others – specifically, parties – from knowing whom one has voted for.  As such, any vote using an unofficial ballot, or containing 2 preferential votes cast on 2 different lists will be automatically annulled. 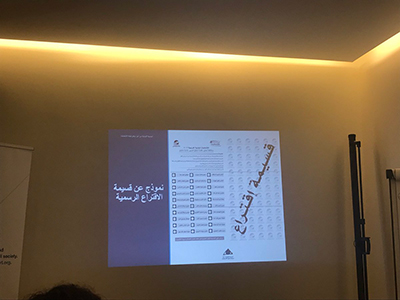 Afterwards, Dr.Mourad went into further details about the electoral system by explaining that the electoral threshold adopted in the new law is equal to the total number of voters divided by the number of seats, which should  give  “alternative” candidates, outside main parties, the chance to be elected.

After this detailed description of the new electoral process, Dr.Mourad attempted to assess the impact of such a law by highlighting its positive and negative aspects. In fact, the new electoral law guarantees a better representation compared to the previous majority law. Moreover, the supervising committee’s independence appears to be preserved since its prerogatives are extended and the committee will also include a member of civil society. However, the new electoral system has been criticised and is seen as not really changing the balance of power. As Dr. Mourad explained the vote counting process remains imperfect and allows political parties to anticipate the results, and manipulate elections accordingly. He pointed out that the positive impacts – that any proportional representation system would have – are mitigated by the sectarian representation system in Lebanon. Thus, the quotas adopted for seats distribution in terms of caza and confessional representation do not ensure accurate representation as the elected candidates are not necessarily the ones who obtained the biggest numbers of votes.