Mobilisations in the Age of the Arab Uprisings: Perspectives from Lebanon and Iraq

On the 26th and 27th of January, The Lebanese Sociological Association الجمعية اللبنانية لعلم الإجتماع (LSA, supported by the International Sociological Association (ISA)), in collaboration with Jadaliyya/ASI, Lebanon Support, and the Sociology, Anthropology and Media Studies Department at American University of Beirut (Sociology-Anthropology at AUB), organised a two-days workshop on the topic of social movements in the Arab region, with a special attention to two countries that did not directly witness the Arab uprisings: Lebanon and Iraq. (Full programme is available here). 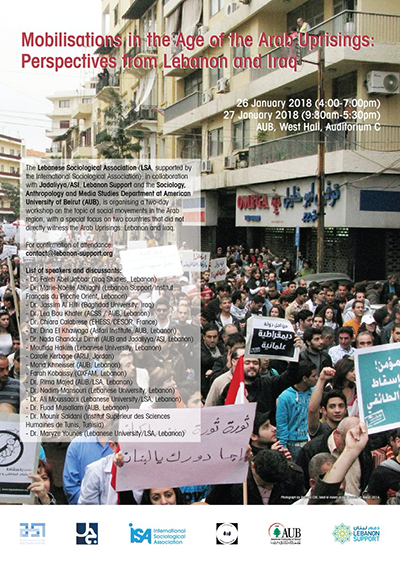 The workshop began with an introductory panel presented by Dr.Rima Maged (AUB, LSA),  Dr. Marie-Noëlle AbiYaghi (Lebanon Support/IFPO), and Dr.Nada Ghandour (AUB, Jadaliyya/ASI), who introduced the problematics covered during this workshop, while reiterating the importance of creating spaces for reflection and collaboration between academics and experts.

The first panel addressed Arab uprisings in different countries and their aftermaths. Dr. Dina el-Khawaga (Asfari Institute, AUB) presented the context of the Egyptian revolution, while providing an overview of the demands raised, actors and movements involved, and results of their mobilisation. Dr. Nadim Mansouri (Lebanese University), revisited and questioned a variety of concepts related to the Arab uprising, such as the definition of “revolution”, and “Arab Spring”, while comparing the strategies and tactics employed by social movements in Arab countries that witnessed uprisings. Finally, Dr. Mounir Saidani (Institut Supérieur des Sciences Humaines de Tunis) described and analysed social movements and mobilisations in Tunisia prior to 2011 and its aftermath.

The second panel focused on the labour movement in Lebanon. Dr. Moufida Hakim (Lebanese University) explored the syndicate movement from a class and sectarian perspective. Before the Lebanese Civil War, this movement contributed to the adoption of a labour law as well as social protection, that included the introduction of significant gains for workers and employees. However, after the Tai’f agreement in 1991, it has been virtually impossible to secure some basic rights for workers. While the syndicate movement was recently able to improve the grade and salary scale of public workers, according to Hakim, no revision has been made to the salary scale in the private sector, although the latter is more productive. Afterwards, Dr. Lea Bou Khater (ACSS/ AUB) analysed the transformation of the labour movement over the past years, through a framework based on three streams: problems, policy, and political streams. Her presentation focused on the 2012 and the 2017 protests for a revised salary scale and wages increase, as well as the role of the Union Coordination Committee, the General Confederation of Lebanese Workers, and the union of private teachers.

Closing this panel, Farah Kobeissy (OXFAM) explored the labour movement from a gender perspective. She found that women workers in Lebanon face challenges at macro and meso levels, respectively from the state, and within syndicates. For instance, at the state level, most policy decisions concerning workers have not been targeting women or protecting them from discrimination. Similarly, on the syndicate level, cases involving gender inequality, discrimination, or violence are not tackled by syndicates as the latter only focus on economic challenges without taking into account the social dimension of gender-related issues. 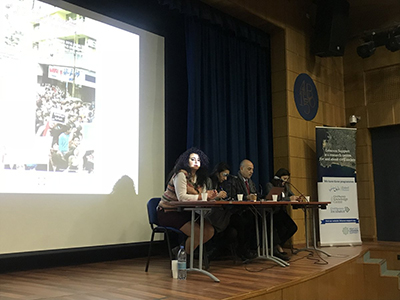 The third panel addressed Lebanon’s 2015 “Hirak” movement. Dr. Maryse Younes (Lebanese University/LSA), introduced the context that led to the emergence of the “Hirak” and presented a comparison of the “You Stink” and “We Want Accountability” movements, with their structures, modes of action, and targeted audience at the centre of her discussion. Mona Khneisser (AUB) presented her thesis about the development of “alternative” organisations and action in Lebanon, based on the case study of Hirak, Beirut Madinati, and Sabaa. She looked into how collective actions and mobilisations that developed in the aftermath of the garbage crisis in Lebanon perceived and framed themselves in relation to “the political”. Lastly, Carole Kerbage (ARIJ) looked into the dynamics at play between participants in protest movements in Lebanon, focusing on the new participants in non sectarian mobilisations. Her presentation aimed at understanding the factors that led to the participation of thousands of protesters in the Hirak movement, and their withdrawal after 29 August 2015.

Moving to the fourth panel on activism and anti-sectarian mobilisations, Dr. Marie-Noëlle AbiYaghi (Lebanon Support/IFPO) presented her ongoing research with co-authors Dr. Myriam Catusse and Miriam Younes on anti-sectarian movements in Lebanon and outlined the challenges and difficulties for such movements to distance themself from sectarians traps. Dr. Fuad Musallam (AUB) looked into the cosmopolitan dimension of secularism that often contributes to disconnecting secular activists from other citizens. Dr. Chiara Calabrese (EHESS/ CESOR) explored the different aspects of political engagement towards Hezbollah. She described the attachment to the hezb as not only organisational but also affective and emotional, since it provides a sense of empowerment and community. 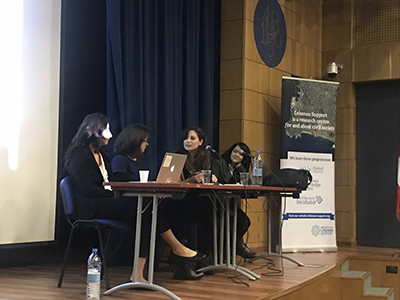 The last panel focused on Iraq’s contemporary movements. Dr. Faleh Abel Jabbar (Iraq studies) analysed the social structure of such movements, pointing out that religious identity as basis for political action ended in the Iraqi protests, thus paving the way for issue politics. Then, Dr. Jassim Al Hilfi (Baghdad University) gave an overview of the context, demands, means, and results of protests and mobilisations in Iraq. He noted how the social movement in Iraq helped spread the concept of civil state in the country.

Following each panel, the audience was able to ask questions and interact with the discussants about their presentations, leading to engaging debates about Arab uprisings and mobilisations.