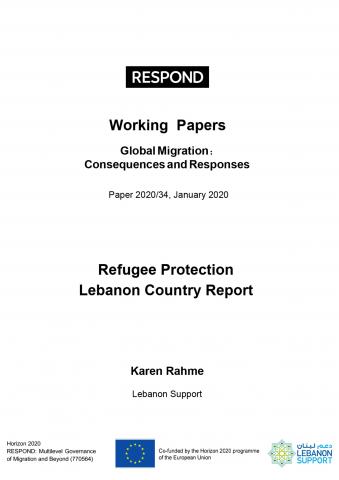 This report provides a contextual analysis of the provision of refugee protection in Lebanon. It highlights the absence of a comprehensive refugee protection legal framework, in favor of a  set of formal and informal ad hoc policies, which are limited in scope and inclusivity. While the Lebanese polity is a signatory of international conventions calling for non-discriminatory protection, and non-refoulement, it falls short in practice with direct and indirect measures, breaching those very principles. The mass influx of Syrian refugees in 2011 highlighted the embryonic nature of the national protection framework, mainly implemented by Lebanon’s General Security, prone to prioritise national security over the provision of protection. Through this report, we uncover narratives of scapegoating propelled in public discourse, correlating the presence of Syrian refugees with acute economic burdens, and negatively impacting prevailing scarce resources. These constructed perceptions have worsened socio-economic conditions, already exacerbated by obstacles faced in renewing residencies, and in the acquisition of refugee status.

This report is part of RESPOND, a Horizon 2020 project studying multi-level migration governance from 2011-2017 through cross-country comparative research in source, transit, and destination countries in 11 different countries. It is the second in a series of five focusing on Lebanon.